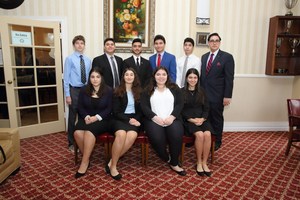 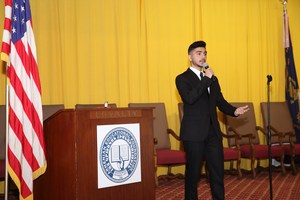 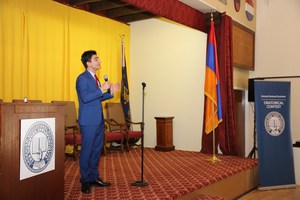 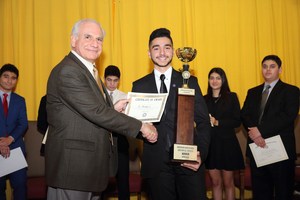 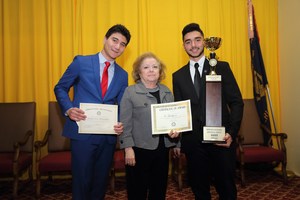 On Saturday, 4 February 2017, two of our AGBU MHS seniors participated in the Armenian Educational Foundation’s Oratorical Contest. Ari Ekmekjian and Daniel Mouradian represented AGBU and expressed their opinions on “the most influential Armenian person” and “keeping the Armenian identity,” respectively.
The contest consisted of two separate groups, one in which the speaker presented their ideas in Armenian, and the other, in English. For the Armenian category, the Spartan student chosen to represent AGBU was Ari Ekmekjian and for the English category, Daniel Mouradian.

Both students showed immense passion for their topics, Daniel Mouradian on the topic of keeping the Armenian identity and Ari Ekmekjian on the most influential Armenian figure in history. Mr. Mouradian stated that we can hold on to our Armenian identity by always contributing to our community, regardless of age or status. Mr. Ekmekjian stated that Mkrtich Khrimian, also known as Khrimian Hayrik, is the most influential Armenian figure. For multiple weeks, each student worked with their teachers to perfect their speech content and delivery. Despite their nerves and the crowd of unfamiliar faces, both Spartans articulated outstanding speeches. Fortunately, Ari Ekmekjian brought the award for the Armenian category; congratulations to Mr. Ekmekjian for his achievement!

Both students want to thank Ms. Lora Kuyumjian and Mr. Rod Flores for their great help and guidance in the preparation of their speech. We are proud of both senior Spartans for their contributions to our Armenian community.