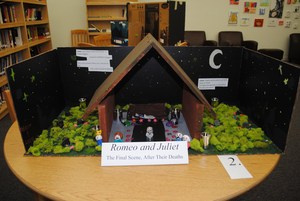 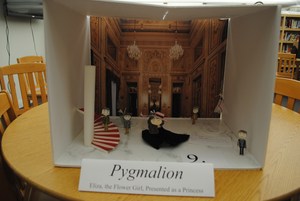 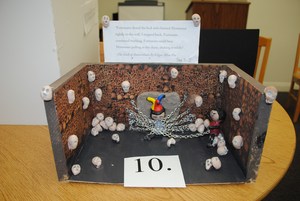 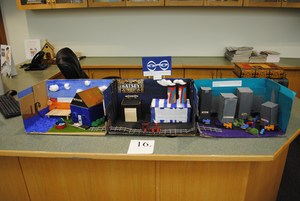 This year marks the second annual English Diorama project. The project is mandatory for all students; it requires students in groups of two or three to represent a scene or passage from any literary work read in class this year. It also requires a short passage from the work that depicts the scene in the diorama.
Students are allowed to use any resource or material except for pre-made figurines. Students need a basic box or platform such as a shoebox as a foundation for their project. For example, one student from the 11th grade class is recreating a scene from The Crucible; using a shoebox, they represented the scene where a man is being accused of witchcraft in a courtroom.

Mr. Flores said, “We settled on establishing an annual diorama competition in which students could show their understanding of a particular poem or scene from the material they've read in their English class that year. Now, as a capstone project, we celebrate what we've read throughout the year by engaging in a diorama competition. You're welcome, Spartans.” In order to receive an impeccable grade, students worked hard to create a visually stunning work of art. Secondly, the diorama had to clearly match the passage, and the observer had to be able to trace the scene from the passage. The project had to pay close attention to detail and had to be done to scale. No premade figurines were allowed. The work had to depict the same tone of the author towards the reader, along with the same mood of the author towards the subject. There were four main guidelines, each worth up to 25 points. Besides the offered points, there were also two extra credit opportunities. The first round of extra credit were the top two in class, which was determined by the teacher of each class. This advanced winners to the second round of extra credit, in which non-english department teachers vote for the best in school.

Students worked every Wednesday and Friday for the March 31st deadline. “In an attempt to create an innovative project, as requested by the administration from all teachers, the English department last year decided to create a project that combines close reading, creativity, and hands on learning.”

The contest winners were announced Tuesday, April 18. Third place was a tie between two groups: Ani Boyajian, Melanie Alcala, & Melinda Alcala, who based their project titled “Eliza at the Ball” on George Bernard Shaw’s Pygmalion; the other third place by Lara Gendal & Tatiana Hamparsomian was “The Death of the Lovers,” based on William Shakespeare’s Romeo and Juliet. Coming in at second place, Solaire Bilanjian & Rachel Bedoyan’s “The Death of Fortunato,” based on Edgar Allen Poe’s “The Cask of Amontillado.” The first place of the Annual English Diorama project of 2017 was won by Vahe Krikorian and Garo Darakjian. Their project was “Gatsby’s Party”, “The Wasteland,” and “New York,” all based on F. Scott Fitzgerald’s The Great Gatsby. This group actually created three scenes in one extremely detailed and beautiful diorama presentation.
Gabriel Ashikian, Alex Postajian, and Richard Vartanian
For a complete list of pictures, please check the Photo Album.

Or check the same album on the school's Facebook page.