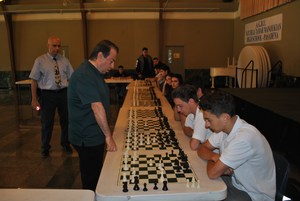 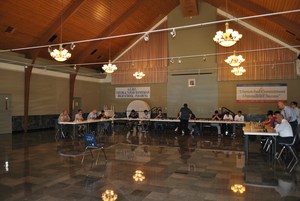 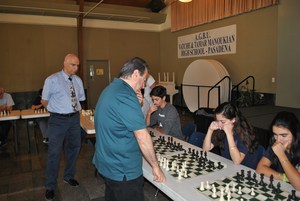 On September 29, chess master Vacheh Gaspar visited AGBU MHS to challenge nineteen Spartans and three teachers. None were victorious against the master, though they still tried their best. The chess master visits us once a year, so better luck next time, Spartans!
Mr. Davidian states Armenians have played and enjoyed chess for thousands of years and that he has enjoyed it since his childhood.  He wants to share his love for the game so he sponsors the Chess Club and organized the event: “It’s a sort of test; for some people, it was something new, so it was a good experience.”

Mr. Zareh has known Vacheh for more than 30 years and is his close friend.  Mr. Gaspar has won competitions all over the world, including the former Yugoslavia, Venezuela, and Iran.  He was a member of the Iran national team and received several medals.  He believes competition can be extremely difficult, but it can strengthen the mind.  This has not been his first time competing against a crowd; even as a child, he would compete against four opponents at once and still succeed.