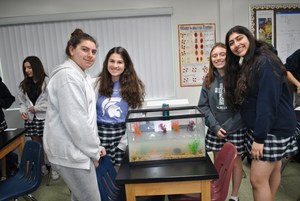 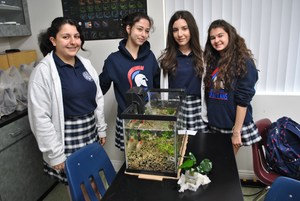 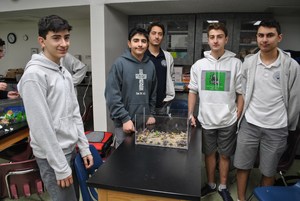 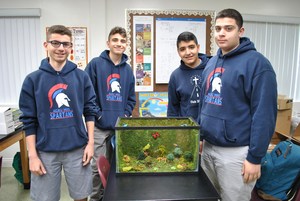 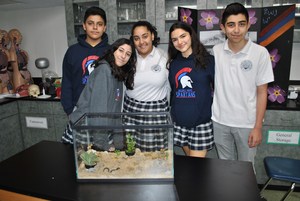 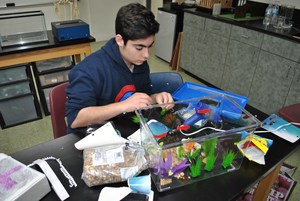 Honors Biology students created a model of the different types of biome in Ms. Juliano’s class.
The desert gets less than 25% of rain in a year. Therefore, plants adapt to rye desert by storing water. Animals adapt by hunting. Some predators are nocturnal, and hunt at night. For example, the mountain lions hunt and feed on the mountain goats. After, the roadrunners and other scavengers feed on whatever remains of the mountain goat. Some organisms find shelter under the rocks, like snakes. Snakes hide under the rocks as a way to hide from predators, and to escape from the scorching sun.
The tropical rain forest represents the tropical biome. We made a model and placed an example or organisms living in it. You will see trees(producers), frogs (first degree consumers), chimpanzees (second degree consumers), tigers (third degree consumers), and the birds (scavengers).
We have created a desert biome with the terrarium shown above. In a desert biome, organisms must adapt to the dry, arid environment throughout the day and the cold, freezing temperatures at night. Producers in a desert biome include cacti. Cacti have adapted to retain large amounts of water, therefore giving consumers a source of kcal energy and water. First order consumers include mice and bugs, second order consumers include scorpions and roadrunners, and third order consumers include snakes and wolves.
There is a tropical marine biome which contains many different species and organisms that make the tank seem realistic. This project helped our group learn about the make- up of an ecosystem, the relationships of organisms and how these organisms interact with each other.