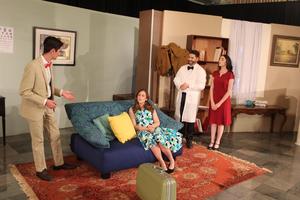 On 18 and 19 April, English Drama and Drama Club staged Neil Simon’s Fools at Boyadjian Hall.
The play is about “fools” in Kulyenchikov, a Ukrainian village cursed with stupidity among its people. Count Gregor inflicts the curse in order to avenge an affront to his family. For the curse to be lifted, a Zubritsky family member must marry the only remaining Yousekevitch, Count Gregor. In love with schoolmaster Leon Tolchinsky, Sophia Zubritsky refuses to marry Gregor. In the end, the Count adopts Leon as his own son and allows Sophia to marry Leon. The curse is lifted.
More guests attended the second performance than the first. The audience was made up of all the actors’ families and friends, as well as our community stakeholders. Our second performance was phenomenal, with laughs left and right. The atmosphere in Boyadjian Hall was revealed in the satisfaction on people’s faces. Our head of school, Mr. Michael J. Pratt, came to both shows to celebrate the colorful performances. During intermission, marketing manager Sabrina Pelenghian provided popcorn for sale and helped with decorations.
Fools was directed by Matt Tavoukjian; the set was produced by Baron Manouk and Mr. Ogrodnik’s set design class. The makeup team consisted of Paulina Iezza, Gayane Movsesian, and Tania Baghdassarian. Raquel Indjian did the hair. The main roles were played by Peter Deirbedrossian “Leon,” Marianne Sahagian “Sophia,” Lucinè Gezalian and Nanor Deirbedrossian “Lenya,” George Terzian “Nikolai,” and Ethan Keshishian “Count Gregor.” The audience showed the most enthusiasm for Pierre Haitayan who played the Count’s “Minion.” The audience guffawed at his hilarious antics.
On the first showing, one of the set walls fell on one of our characters, making a lot of people laugh. Though unplanned, the actors understood that “the show must go on!” They pressed on and finished the memorable performance.